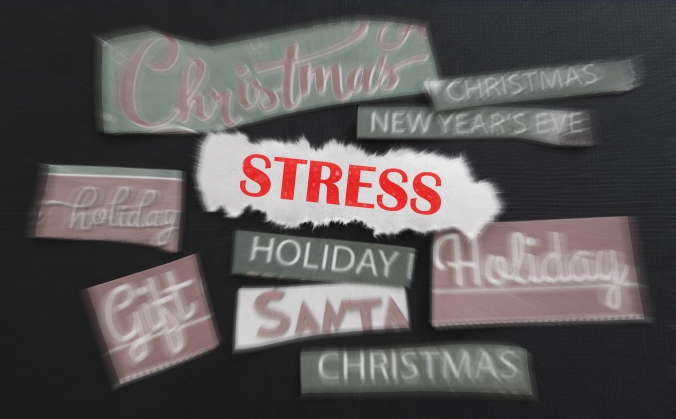 There’s no shortage of stuff to think about. As the holiday season approaches people are busy making plans and preparations for Thanksgiving, Christmas, and the New Year.

In the midst of all the hustle and bustle we can let the peace of Christ rule in our hearts. It’s what Christians are called to do. We can certainly be thankful for this.

This is exactly what Paul wrote to the church at Colossae.

Let the peace of Christ rule in your hearts, to which indeed you were called in one body; and be thankful. (Colossians 3:15)

It can be hard to let the peace of Christ rule when the world constantly vies for our attention. This is why Paul wrote a few verses earlier:

Some may be tempted to daydream about sitting on a cloud or playing a harp. That’s not what Paul was encouraging. He was encouraging Christians to think about Jesus. Leading up to this statement in Colossians 3:2 Paul made ten amazing statements about who Jesus is. This is what we are supposed to think about.

1. Jesus is the image of the invisible God.

In the Old Testament God commanded that no image of Him be made. It was part of the 2nd Commandment. Contrary to pagan temples which contained idols, the Hebrew Temple and Tabernacle had no image or idol in it.

God Himself gave the image. It was His Son, Jesus Christ.

Don’t get the image of God given in the Scriptures confused with the image of Jesus you’ve seen on TV, movies, internet memes, or from your own imagination. Set your mind on the image God provided by getting to know the Jesus of the Bible. Read the Gospels. Read Acts. Read Hebrews. Read Revelation. Read the New Testament again and again to get to know the true and living Jesus.

2. Jesus is the firstborn of all creation.

Some misunderstand this phrase because we don’t understand the context. This does not mean Jesus was created first. The “firstborn” is a title of status. In Greco-Roman society and Jewish culture the firstborn of each family held a special status.

Jesus holds this special status over all of creation. Jesus is preeminent.

Jesus is not part of the creation. He is the one who created everything. Talk about power and might!

Paul writes (Colossians 1:16) that Jesus is the One through whom and by whom all things were made. Things in the heavens. Things on the earth. Visible and invisible. Jesus created it all.

4. All things exist for Jesus.

He didn’t make it for you. Quite the contrary! He made you for Him.

all things have been created through Him and for Him. (Colossians 1:16b)

Really spend some time thinking about this. It will shift your entire worldview.

5. Jesus sustains all of creation.

Paul writes that in Christ all things hold together (Colossians 1:17). Jesus sustains the world.

The  oxygen we breathe, the water we drink, the blood in our veins. It is all held together by the will of Jesus. If He stopped willing to sustain the world for even a moment everything we know would cease to exist immediately.

What a powerful God we serve!

6. Jesus is head of the church.

Jesus is the head.

7. Jesus is the firstborn from among the dead.

Jesus is more than the head of the church. As firstborn from among the dead Jesus is the head of the entire human race. All will eventually be resurrected and stand before the Judge.

As firstborn from among the dead, Jesus is proof that the resurrection will happen for everyone. Jesus is also the standard by which we will be judged.

because He has fixed a day in which He will judge the world in righteousness through a Man whom He has appointed, having furnished proof to all men by raising Him from the dead. (Acts 17:31)

8. Jesus is the only way to be reconciled to God.

Our sin separates us from a Holy and Just God. We rebelled against Him. He has every right to crush us under His wrath.

Because God is loving and merciful we have been given a way to have our sin forgiven and to be reconciled to our God.

For it was the Father’s good pleasure for all the fullness to dwell in Him, and through Him to reconcile all things to Himself, having made peace through the blood of His cross; through Him, I say, whether things on earth or things in heaven. And although you were formerly alienated and hostile in mind, engaged in evil deeds, yet He has now reconciled you in His fleshly body through death, in order to present you before Him holy and blameless and beyond reproach (Colossians 1:19-22)

This is great news.

However, for anyone who thinks this salvation is cheap or the result of simply raising a hand or repeating a prayer, Paul continued,

if indeed you continue in the faith firmly established and steadfast, and not moved away from the hope of the gospel that you have heard, which was proclaimed in all creation under heaven, and of which I, Paul, was made a minister. (Colossians 1:23)

You have been reconciled if you continue in the faith firmly established and steadfast. Don’t give up. Endure until the end.

9. All the treasures of wisdom and knowledge are hidden in Jesus.

Get to know Jesus. The more we get to know Him the more we unlock of true knowledge and wisdom. God is not holding out on us. Walking with Him – knowing Him, being known by Him, making Him known in the world – is true, abundant life.

10. Jesus is the substance of all the Old Testament shadows.

The Old Testament and New Testament are not contrary to each other. The Old pointed to the New. The New fulfilled the Old.

The Old provided shadows of the genuine substance. That substance is found in Jesus.

Set your mind on these things.

Let the peace of Christ rule in your heart. Give thanks. There is plenty to be thankful for. Today and always.

One thought on “10 Things to Think About”