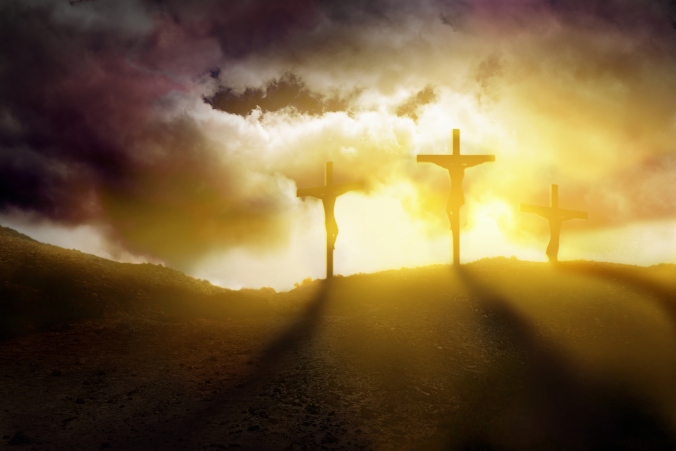 Today is the Christian holiday called “Good Friday.” It’s a celebration of and remembrance of the crucifixion of Christ.

The name of the holiday causes confusion for some. On the surface, it is easy to ask: What’s so good about a crucifixion?

The Jews and Romans certainly didn’t intend for it to be good. Crucifixion was designed by the Romans to be as shameful and painful as possible. Jesus of Nazareth was crucified by the Romans as an enemy of the state.

Jesus was handed over to be crucified by His own people. They accused Him of being a blasphemer. They wanted Him to die a shameful death under the curse of God.

On the surface, there seems to be nothing worthy of celebration or remembrance. Nothing good. That’s why we need to look beneath the surface.

The importance and glory of the crucifixion goes deeper than what we may initially see. While it’s true that the Jews handed Jesus over to the Romans to be executed, we cannot miss that Jesus willingly gave His life. He came for this purpose.

Early in Jesus’ ministry He told His disciples that this was going to happen. They just didn’t really believe it. It seemed contrary to their own plans for Christ’s ministry.

From that time Jesus began to show His disciples that He must go to Jerusalem, and suffer many things from the elders and chief priests and scribes, and be killed, and be raised up on the third day. Peter took Him aside and began to rebuke Him, saying, “God forbid it, Lord! This shall never happen to You.” But He turned and said to Peter, “Get behind Me, Satan! You are a stumbling block to Me; for you are not setting your mind on God’s interests, but man’s.” (Matthew 16:21-23)

Sometimes, it seems, they thought He was speaking in parables or allegory. They didn’t take His direct statements at face value.

As they were coming down from the mountain, He gave them orders not to relate to anyone what they had seen, until the Son of Man rose from the dead. They seized upon that statement, discussing with one another what rising from the dead meant. (Mark 9:9-10)

This was all to fulfill the Scriptures.

A thousand years before the birth of Jesus, David prophesied in the psalms regarding the crucifixion.

For dogs have surrounded me;
A band of evildoers has encompassed me;
They pierced my hands and my feet.
I can count all my bones.
They look, they stare at me;
They divide my garments among them,
And for my clothing they cast lots. (Psalm 22:16-18)

Jesus quoted the first verse of this psalm while hanging on the cross. He was teaching them to look deeper. Look beyond the surface scandal and see the deeper and glorious truth that He was fulfilling Scripture before their eyes.

The prophet Isaiah likewise prophesied about the crucifixion more than 700 years before the birth of Christ.

But He was pierced through for our transgressions,
He was crushed for our iniquities;
The chastening for our well-being fell upon Him,
And by His scourging we are healed. (Isaiah 53:5)

The teaching of Scripture is that God became a Man to live a sinless and perfectly righteous life, and then to lay down His life as a sacrifice for His people, bearing their sins in His flesh. On the cross, Jesus was fulfilling this promise.

According to the law, everyone who is hung on a tree (as Jesus was in the crucifixion) is accursed by God (Deuteronomy 21:23).

Christ redeemed us from the curse of the Law, having become a curse for us– for it is written, “CURSED IS EVERYONE WHO HANGS ON A TREE “– in order that in Christ Jesus the blessing of Abraham might come to the Gentiles, so that we would receive the promise of the Spirit through faith. (Galatians 3:13-14)

Jesus stood in the gap for His people because only He could. Only He could endure. Listen to the description of God’s furious power and wrath from the prophet Nahum:

Mountains quake because of Him
And the hills dissolve;
Indeed the earth is upheaved by His presence,
The world and all the inhabitants in it.
Who can stand before His indignation?
Who can endure the burning of His anger?
His wrath is poured out like fire
And the rocks are broken up by Him. (Nahum 1:5-6)

Now look below the surface. While no one would try to stand before the indignation of God nor try to endure the burning of His anger, this is exactly what Jesus was doing. He was doing it for His people and for our salvation.

Pay close attention to what happened when Jesus gave up His spirit when His work on the cross was finished.

And Jesus cried out again with a loud voice, and yielded up His spirit. And behold, the veil of the temple was torn in two from top to bottom; and the earth shook and the rocks were split. (Matthew 27:50-51)

As the wrath of God was dissipating it caused the earth to shake. The rocks were split. Jesus was enduring God’s fierce wrath and indignation for the entire time He hung on the cross. As soon as He gave up His spirit and breathed His last the remnants of God’s wrath cause the earth to tremble.

Jesus came to suffer and die under the curse of God. He came to bear the sins of His people in His flesh. He came to die and rise again so that salvation could be preached to all nations in His glorious name.

On the surface, the crucifixion was shameful and scandalous. But underneath we see the glory of a promise-keeping Savior.

Christ endured the wrath of God on the cross so we wouldn’t have to. The gift of salvation is freely available to all who will turn to Him and believe.

“He who believes in the Son has eternal life; but he who does not obey the Son will not see life, but the wrath of God abides on him.” (John 3:36)